The 2022 Yamaha R7 got the 650cc mid-segment sportbike market excited, close on the heals of the Aprilia RS660 launch. The difference is, Aprilia had been teasing the RS660 since EICMA 2018, but the Yamaha R7 hit like a shock and awe event that nobody foresaw.  Question is, which on the best for people whole love fully faired sports bikes but do want to them to be reasonably comfortable and practical.  It makes sense to compare them on Looks, sound, exhaust notes, comfort, rider aids and equipment and reliability.

Looks are subjective, but I like the Aprilia RS660 the most. Yamaha R7 would be the next. Honda CBR650R looks like a smaller version of the Fireblade at least the front does. Ninja 650 in it's latest avatar does look pretty sharp too. Looks are, of course, a matter of personal opinion, so type away your own ranking in the comments 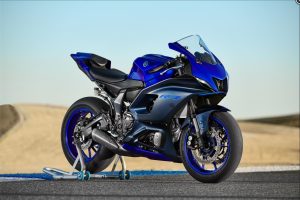 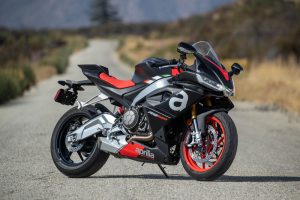 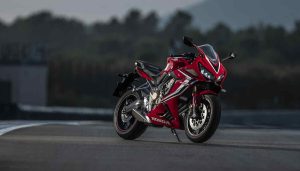 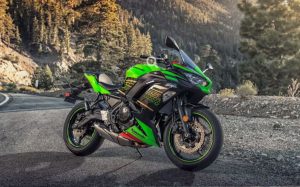 I love the stock exhaust sounds of the Yamaha R7 & the Aprilia RS660 but the Honda CBR650R, at least in the stock trim, sounds like a Honda car. You can definitely extract it's true potential with an aftermarket exhaust because at the end of the day, it's an in-line 4. The Kawasaki Ninja 650 is criticized for a bland exhaust note and I find it hard to argue with that. Take a listen to the exhaust notes in the full spec comparison video on the RiderXP Youtube channel

If comfort is an important consideration for you (and it should be, because once the euphoria of buying a new motorcycle wears off, you start to notice the significance of practical aspects), the Kawasaki Ninja 650 would be the star! Aprilia has shown in their rider's triangle diagram that the Ninja 650 rider's triangle is more comfortable than the Aprilia. The Yamaha R7 is pretty comparable with the Aprilia RS660. The CBR650F was very close to the Ninja 650 but when Honda decided to make it into a more sporty Honda CBR650R, they did compromise on the comfort a little bit. Nevertheless, it would still be more comfortable than the Yamaha & the Aprilia as you can observe from these diagrams that I compiled. 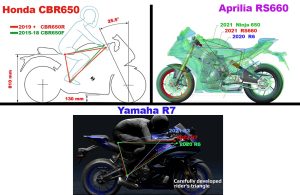 Even though the Aprilia RS660 has the most horsepower, the CBR650R's inline 4 engine allows it to keep up or even beat the top speed. For everyday street riding, I feel like the Ninja 650 does have enough power. However, if you're considering track days, the Yamaha R7 would be the cost effective choice, the Aprilia RS660 would be the fanciest of them all. For street, the CBR650R would be the fancy one and the Ninja 650 continues to be the pocket friendly sport bike.

Figures as per manufacturer websites, and/or media outlets

Beyond a doubt, the Aprilia RS660 is the most high tech motorcycle among the 4 but the CBR650R does have enough rider aids to make it pretty reasonable for the street. Or you could be the guy who just doesn't care about rider aids and could save some money buying the Yamaha R7 or the Ninja 650 depending one whether you're gonna keep it street or take it to the track. 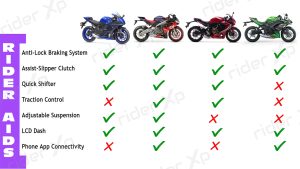 For a detailed review and comparison, do watch the full video on my Youtube channel.